There are 562 tribes of Native Americans recognized by the United States government currently living in America. There are even more if you count tribes that live in Canada, Central America, and South America.

Each tribe has a unique culture and that includes the art they produce. Since there are so many different tribes, it may sound a bit overwhelming. But we’re here to help. Read on to discover the four best places in the United States to experience the diverse art, culture, and history of the Native Americans.

The National Museum of the American Indian

The National Museum of the American Indian is one of the premiere locations to find large amounts of quality Native American art. There are nearly 1 million individual pieces to be exact, the majority of which come from the United States. The museum contains various styles, including pieces from the Plains tribes like the Blackfeet, Lakota, and Comanche tribes. These pieces include mostly historical pieces such as the weaponry and garments used during the Indian Wars.

The National Museum of the American Indian has two locations: one in New York City and the other in Washington D.C. and offer both classes and guided tours in addition to general admission.

The Museum of Indian Arts and Culture 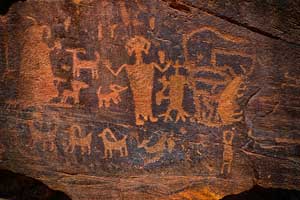 The Museum of Indian Arts and Culture, located in New Mexico and part of the Museum of New Mexico system has a lot of Native art related mostly to the Southwestern tribes of the United States. The museum also contains many different archaeological objects but has over 75,000 art objects that include clothing and other types of woven fabric, pottery, baskets, jewelry, and sculpture.

There are also several different paintings and paper art on display, including those painted by students of Dorothy Dunn, who was an art teacher at the Santa Fe Indian School and founded the Studio School as part of it for her students.

The Museum of Indian Arts and Culture also features exhibitions of currently working Native American artists as well as past ones, many of which are featured for several months at a time for the public to see. Educational programs like classes, guided tours, and outreach are also offered.

The Heard Museum of American Indian Art and History

Located in Phoenix, Arizona, the Heard Museum of American Indian Art and History contains a large collection of around 40,000 different kinds of objects related to many of the Southwestern Native American tribes, including the Hopi, the Zuni, and the Navajo.

Several of these objects are things like textiles, beadwork, and ceramics, as well as a specific type of doll made by Hopi Native Americans called katsina dolls, which are religious figures carved from cottonwood root used to teach young Hopi girls about the spiritual connections to the natural world.

In addition to the historical collection, there are over 4,000 different paintings and other types of modern fine art created by Native American artists from the 20th century until today. These also include photographic portraits of famous Native Americans and portraits depicting aspects of the spirit realm. Many of these objects from the collections can even be viewed online on the museum’s website.

The Cherokee Heritage Center is located in Tahlequah, Oklahoma and, as the name suggests, focuses primarily on Cherokee culture and art. This museum takes a more historical approach to its art, as evidenced by its feature known as Adams Corner Rural Village, which is seven buildings arranged to depict Cherokee life from several centuries ago. There is also the Trail of Tears Exhibit, which features several historical artifacts from and facts about the infamous removal.

There are also more traditional artistic exhibits and events that occur here, however. This includes the Trail of Tears Art Show, which is an artistic competition that’s been held for 45 years so far that lets several different Native American artists compete in their chosen medium—such as basket weaving, sculpture, pottery, jewelry, miniatures, and painting—to express their own heritage. A winner is selected and members of the public can come enjoy these contemporary pieces of art.

Bryan Pasche-Johnson
Bryan Pasche-Johnson is a Santa Fe-based anthropologist who has been writing on Southwest Native American cultures for nearly 10 years. When he’s not buried in a new history book, he can be found practicing jazz progressions on one of his many guitars.