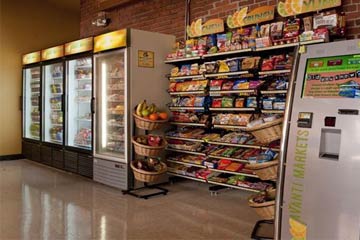 The other day, I was travelling in the Delhi Metro when I suddenly felt thirsty. Once I got down at the destination station, I promptly inserted a Rs. 10 note in the Self Help Kiosk and out came a packet of fruit juice. This is when an idea struck me, if one can have such kiosks to stock juices, mineral water and snacks, why can’t such a system be replicated on a large scale to tackle a lot of problems faced in implementing the Public Distribution System in India?

However ridiculous it may sound, the idea is simple and if implemented properly could actually help us get rid of a lot of the shortcomings of the present Public Distribution System (PDS). At present the PDS is India’s largest food security system which is meant to provide 35kg of grain (rice or wheat) to each Below Poverty Line (BPL) family every month through its expansive network of approximately 5 lakh PDS or Ration Shops. While the objective of this scheme is very noble, its impact on the ground is not as envisioned. Rampant corruption at every level means that a lot of grain meant for the poor makes its way to the black market while the real beneficiaries go to sleep on an empty stomach. Secondly, even when the grain makes its way into the PDS Shop, the attitude of the shop owners is often callous and there are widespread instances of cheating and weighing discrepancies.

The solution according to me is simple, bring in technology and cut off the middlemen; computers are not known to cheat after all. Like we have ATM Machines to distribute cash (even villages have started to have their own ATMs nowadays) we could have ‘ANNAPOORNA RATION KIOSKS’ to distribute the supplies which the citizens of India are entitled to. Firstly, all the grain procured from farmers across the nation must be processed and packed hygienically into bags of 1kg, 5kg, 10kg and so on. This would not only give an assurance of quality to the consumer, but also provide the much needed boost to the food processing industry. Plus, the often repeated crisis of grain meant for the PDS rotting out in the open due to poor storage facilities can be taken care of. Then these packed bags can be deposited into the various ‘Annapoorna Kiosks’ from where the beneficiaries can procure grain as and when required. This would have several advantages.

First and foremost, through a regulated electronic system, a lot of corruption and pilfering can be avoided. Secondly, instead of queuing up only on the select time and day the ration shop is open, people can access these kiosks at any time they wish to and obtain whatever amount of grain they need; accessibility at the grassroots would improve drastically. Thirdly with the advent of AADHAR and the Biometric system, targeting such subsidies would be much easier and efficient. Since direct cash transfer of subsidies is already underway, the subsidy amount could be transferred directly to the beneficiaries’ bank account and a biometrically linked ‘Annapoorna Card’ could be issued; using which only the entitled persons may obtain the rations. Fourthly, once quality is assured, even the upper strata of the society may be encouraged to buy products from such kiosks at market rates, thereby augmenting the self-sustainability of such schemes and reducing the subsidy burden. It has been seen that wherever the government service providers have been able to guarantee quality, the middle classes have gotten over their qualms of accessing their service, the ‘Idli at Re. 1 each’ scheme of the Tamilnadu government being a prominent example.