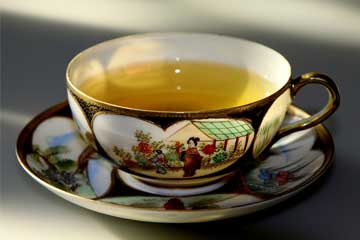 High blood sugar (glucose) levels predispose our bodies to a whole spectrum of medical conditions affecting almost all the organ systems and are also linked to accelerated aging. Excess sugar also results in obesity which itself is a precursor for a number of diseases. Persistent elevated blood sugar levels are found in people suffering from diabetes, called as Madhumeh in Hindi.

Diabetes is classified into Type I and Type II based upon the mechanism involved. While Type I Insulin dependent where the problem lies in the insulin production, Type II is Non-insulin dependent where the problem lies with receptors involved. In both the forms the mechanism involving insulin that is responsible for absorption of blood sugar is defective, thus sugar remains in blood for longer periods.

EGCG (epigallocatechin gallete) is one such polyphenol, the most common catechin present in green tea. It is responsible for most of the beneficial effects of green tea. It influences the manner in which glucose is metabolised by sensitizing the cells. EGCG mimics an insulin like action promoting gluose uptake by the tissues and conversion to glycogen and lipids, thus decreasing blood glucose levels.

Other Benefits of Green Tea in Diabetes

Anti-aging: Since insulin is responsible for controlling metabolism, which itself is tied to aging. Lack of insulin (Type I Diabetes) or its inefficient function (Type II Diabetes) result in rapid aging. Green tea by mimicking insulin like action prevents excessive aging.

Controls Obesity: Role of Green tea in controlling weight is widely known. It becomes even more important in diabetics who are even at a higher risk of obesity and all complications related with obesity to control weight. Thus, effectively making use of green tea in diabetics can also be useful for overall heath in diabetics by aiding in weight loss.

Also, drinking liquid is associated with early satiety, so you tend to eat less. Moreover, it relaxes the muscles of stomach and intestines, thus slowing down the physical movement of food. So you feel full and don’t get hungry quickly. Green tea may also play a role in preventing triglyceride metabolism and absorption in digestive tract.

Anti-oxidants: The anti-oxidants present in green tea neutralizes the free radicals present in the blood. Free radicals contribute to a number of health problems including heart attack, atherosclerosis, stroke, enhanced aging and cancer.

Feeling guilty when you eat dessert? Here’s 3 tips to stop the food guilt

10 of the Best Summer Cocktails for the Hottest Parties

10 Foods to Strengthen Your Immune System in Winters