One of the troubles of having nitpicky grandparents around is to constantly be at the receiving end of pretty vengeful discourses on why the current world is nothing short of the Devil’s handiwork. With them jumping on every opportunity to claim that their era, howsoever ancient, was far superior to the unlawful jungle we wade through every day, and with the media amply feeding their delusions, it is hardly surprising to see a familial transmission of this ability. As a result, a dismal outlook on the current world scenario seems an ineluctable outcome. When Owen Wilson’s character in “Midnight in Paris”longs for having been born in a lost era, he belongs to a sizable section of people plagued by the nostalgia of an historical era. Excepting the whimsical eccentricities of the stereotyped historians (who stereo-typically get the glitter in the eye, and start the boring rambling about the bad kind of dates at the smallest hint of any ancient topic), I believe this time is indeed the best to have been alive in.

WHY DO MOST THINK ITS NOT?

Knowing the perilous quicksand of conformity, our spidey sense should set off at the earliest sign of unanimous nodding. Evolution has so strongly imbued us humans with the intrinsic drive towards pessimism (For being optimistic about lions and about your odds at living happily in the savannah with them, might seem a bit unfavorable to natural selection!), that we have a high propensity to start believing the sad scary things told to us and adopt a gloomy interpretation of the current scenario. Media, being subject to the fallacies of nature all human institutions are susceptible to, also highlights the not-so-cheerful version of the world happenings.

Men are made of a myopic mind (women too, this was just to uphold the alliteration!). We often miss the forest because of the trees. Hence, the relatively smaller traumatic events with a temporal proximity have a larger psychological bearing than the larger but temporally distant. Impact Bias, Errors in comparative value and a plethora of normal human psychological features make objective thinking difficult. What adds to a falsified outlook is the fact that we look at current statistics, and not trends. When we see that 1 out of every 9 children is under-fed, we tend to believe that we are living in a screwed world despite the fact that the rate of decline of these figures is at its all-time-best, and the figures itself are also better compared to most of history. Looking at the larger trends is a valuable asset (ref: delayed gratification and the marshmallow experiment ), and hence, it is necessary to debunk the myths of a bleak scenario.

Most people today believe that we live in bad times, dangerous and violent, and in no way the best time to be alive. Not making this a half-full-half-empty debate, (which is usually my last resort at pestering people by meaninglessly labelling them cynic when all other worthy pursuits of sensible debaters run out), let us see why this is the best time to be alive!

( Here I have presented a discussion of the global scenario. These facts and trends are not absolute, both temporally and spatially. The world is a dynamic ensemble of stochastic forces, ever susceptible to unpredectable bouts of fluctuations. And hence to grasp a directionality in the progress of mankind, I believe, we cannot look at the short-term changes. We need to zoom out. )

Steven pinker, an accomplished Harvard academician, presents a huge amount of scientific data (and the analysis thereof) in his book “The Better Angels of Our Nature”. The crime rate, quantified by the number of homicides and murders, has declined drastically since the middle ages, and an estimate places the decline from 110 murders per 100,000 people in the 14th-century Oxford to fewer than 1 in 100,000 in the mid-20th century London. Global figures were around 500 in the prehistoric times (interestingly such studies involve a correlation between the injuries on excavated skulls and the discovered weapons appropriately dated to that era!), and are currently between 6-9. Wars also show a greatly relieveing trend. According to the former diplomat Scott Gilmore, not only has there been a 40% decline in the number of civil wars over 20 years, but there has been a decline of expected deaths per war from 86,000 in the 50’s to about 3000 now. A drop from 15% to about 0.7% in the proportion of people dying in wars seems hugely substantial.  Notwithstanding acute precipitations like the Cuban crisis, the trend concerning the fear of a nuclear holocaust is also positive, nuclear warhead stockpiling declined from 30,000 in 1991 to less than 5000 currenly. All these violent crimes, included under the crime rate, show a very positive decline over the time.

The nature of crime has also, in a manner of saying, “improved”. Genocides in the old testaments, gory mutilations evidenced in the Shakespearean text and the Grimm’s fairy tales and the medieval torture devices (well propularised by hollywood), have all given way to less appalling, and ironically, more “humanitarian” crimes of the modern day. We are, by all estimates, much safer today then we were decades ago; the society much less violent.

Malthus’s (and more scary ones of Ehlrich) predictions of a food-starved future was, in lieu of the current trends, a false alarm. Although our numbers have been increasing, food production per capita has been rising steadily since the 1960’s. A 25% improvement in the per capita production is seen as per the estimates of FAO. The Global Hunger Index by the International Food Policy Research Institute studies developing countries, and includes malnutritio and child mortality to create the GHI, which shows a a huge decline since the 90’s, a drop from a GHI of 20.6 in 1990 to 12.5 in 2014 in the developing world (east and south-east asia shows a drop from 16.4 to 7.6). 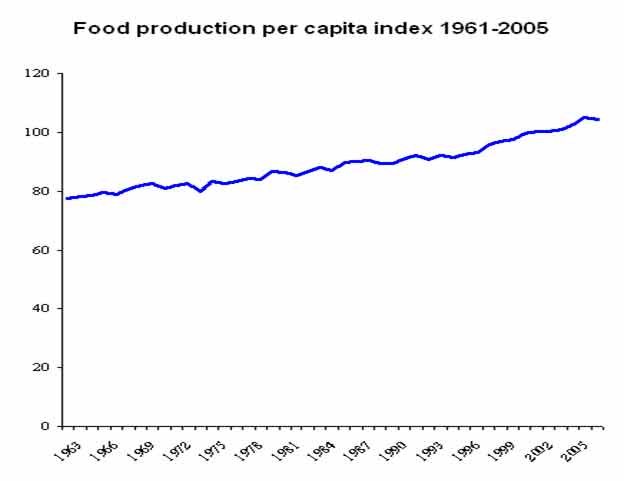 An excellent trend of improvement in life expectancy is evident. Talking facts, almost for the entire time for which humans have roamed the planet, the expectancy has stayed around 30years, falling to even lower levels in tumultous times (Rome; see references) but have skyrocketed since the recent medical revolution to almost magical-seeming figures of >70 years. The rise in life expectancy comes with a concomittant improvement of the general quality of life and health, a decline in a huge variety of diseases (and the elimination of a few). A decline from 797 per 100,000 deaths by infectious diseases in the beginning of the 20th century to 59 in 1996, shows a clear improvement in the quality of life. Elimination of terrible diseases like the plague (For gamers, the devastating potential of the “Black Death” is apparent from the fact that it is a cheat code to kill all the players in Age of Empires) and Small pox make today the healthiest day to be alive.

Women empowerment is the need of the world in light of the existing gender disparity. But the improvement in this sector is remarkable. Gini measure, a statistical technique explored by Allison (1978) to measure global gender disparity(see the references) shows a huge improvement over years in almost all spheres of welfare (Education, Jobs, Health and Economic contribution) from 1960 to 2005. The number of women in almost all government posts are rising, and the rate of decline of this disparity is also rising.

Qualitative improvements in the life of women are evident by the abolishments, at least to a considerable extent, of the long-prevalent social evils that plagued most societies in the middle ages. Although present, there is no denial of their decline. A change in Ideologies is something that is difficult to factually document. What in the vedic era was dictated by law now seems obviously meaningless to a logical thinker. This change in the thinking paradigm, is, I believe, the most drastic in case of women empowerment. We have come a long way from the arguably chauvinistic connotations in our epics (No offence!) to a plethora of female-led stories in today’s literature. For Pop-culture buffs, the movie “Lincoln”, along with its cinematographic brilliance, also shows that the very thought that women should also have a right to vote seemed ridiculous to the then-labelled progressive congressmen, which now seems apparent even to the relatively narrow-minded sections. Women empowerment, hence, in my opinion, is most well-addressed today than it ever was.

The decline in sexual assault and rape by a sizeable margin is another indicator of the aforementioned. To anyone who has read Michael Crichton’s “Timeline”, it might be apparent that it is much safer in general for women today than what it was in the middle ages (and for those who haven’t, read!) Apart from this, decriminalisation of homosexuality, a landmark step towards equality and liberty has also never shown a better prospectus. Although still a semi-taboo topic, the concept of gay rights was almost a laughable thing in the past. 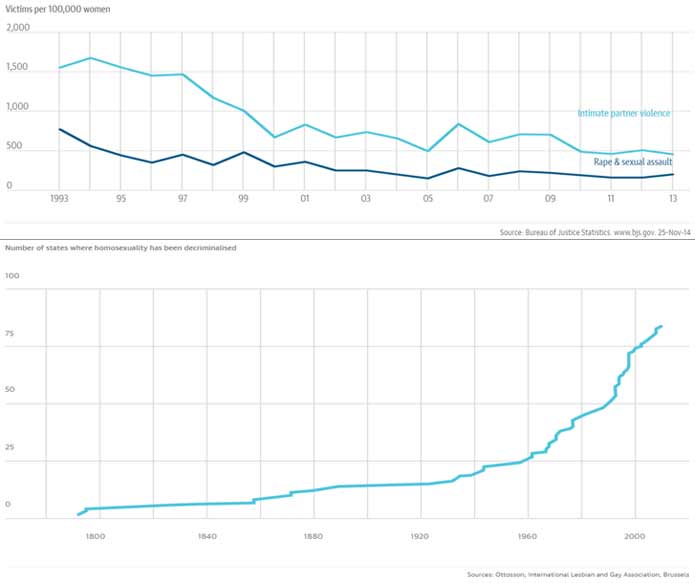 REST OF THE ARGUMENTS

Social media, and the rise of Facebook (Nice title of a dystopian sequel for the planet of the apes series), is one of the greatest boons this time has to give. Instead of railing on about the phenomenal leap of utility that internet provides, and the humongous contributions of social networking in progress of the world, I would just like to implore the reader to read the comment sections of Donald Trump videos. His seemingly boundless capacity to brew up controversial statements is surpassed by the ever-so-boundless capacity of people around the globe to make the most sarcastic and hilarious jests at every point.  (Ref: shows like John Oliver’s “Last Week Tonight”, Comedy Central’s clips by Trevor on trump, Jimmy Fallon on Trump)

Needless to say, the efficiency and convenience afforded by the technology today is hardly something that requires factual citations. And except for the scary but not very substantiated claims of a cyborg apocalyptic takeover which have been popularised in disporportion to their likelihood (Ref:”Matrix”, “I-Robot”; both of which have happy endings, just by the way.), there is no reason to not consider the technological revolution in favour of the cause I am arguing for here.

All these arguments do not say that we are done. While it is true and important to realise that we have a huge way to go, it is both necessary and empowering to also acknowledge that we have come a long way!

AGREED (please do). SO NOW WHAT?

Thanks to the wisely written children stories, all of us have an almost unsurmountable urge to seek a moral out of everything we read (and then let the laws of time decay play their part). Part of the same pageant, and subject to the same urges (No pun intended), I wanted to illustrate two things out of the aforementioned discussion.

Nullius in Verba, the motto of the Royal Society of Science which translates roughly to “take nobody’s word for it”summarises it. Like the inevitable proportion of people who tag along a rally without the faintest idea as to what the protest is about,(the night howlers, for those who have watched “Zootopia”) a lot of our fellow brethren will repeat what they hear without allowing the better portions of their brain(A doubtful assumption) to ponder over it. Hence, to think before believing is the cornerstone of change.

Secondly, optimism. If the repeated discourses of the myriads of motivational speakers, (and teens on Facebook pretending to have unlocked the mysteries of life) were not enough to convince you that we indeed are the luckiest souls, I hope this will convince you to be grateful. So, Rejoice!